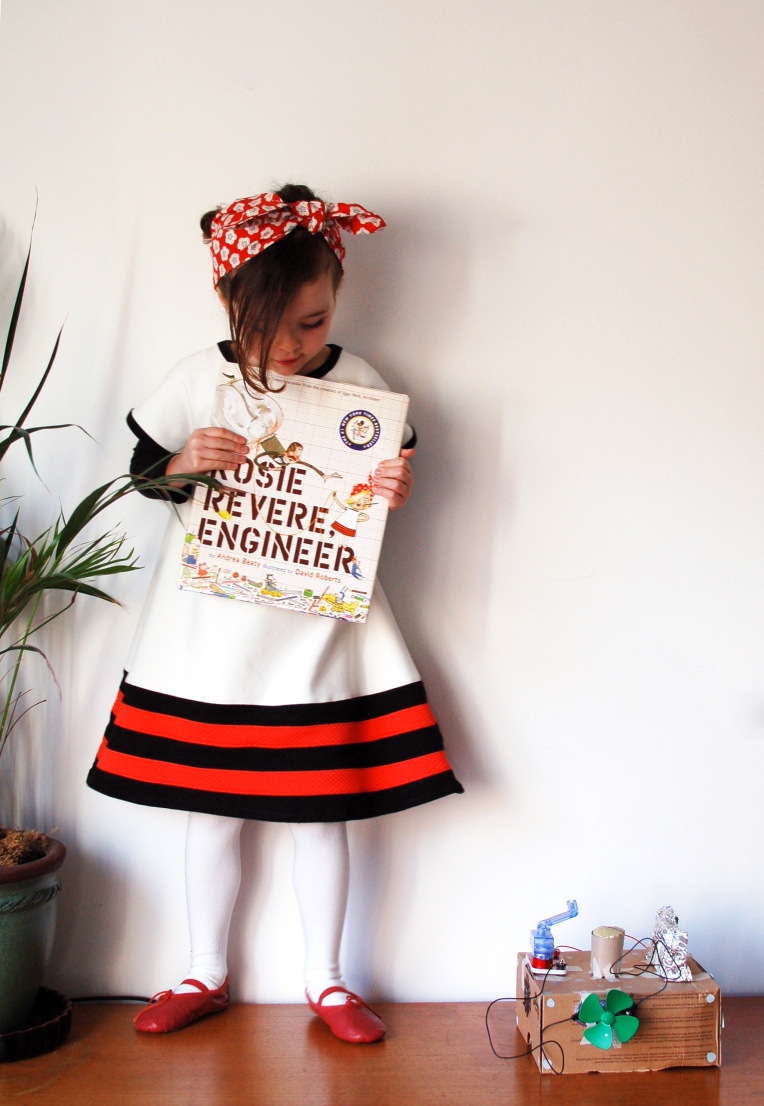 Our favourite dress up of the year World Book Day came round again albeit in a delayed fashion thanks to snow related school closures.

This year they both had very clear ideas about which characters they wanted to be and by happy coincidence they were both characters whose costumes I loved the idea of making.

After a few years of some fairly obscure choices  (see Emily and Riva) my eldest was keen to choose something instantly recognisable but with just as much impact, so she narrowed it down to Medusa.

The main part of that, of course, had to be some sort of headdress, which I went about making in what I thought would be the simplest and most comfortable way.  And, preferably easy to store so it could be reused too.  The last factor ruled out papier mache which arguably would have been the most effective.  I was also reluctant to buy premade plastic snakes as it seemed like an unnecessary purchase and a waste of plastic. The solution I went with was a wire structure covered with tubes of fabric scraps with little felt tongues. 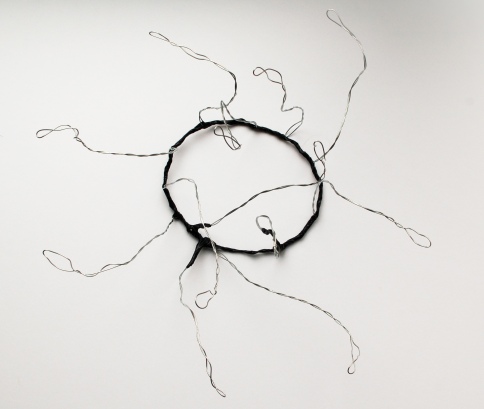 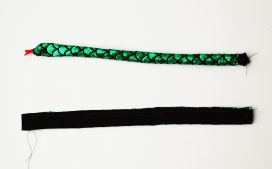 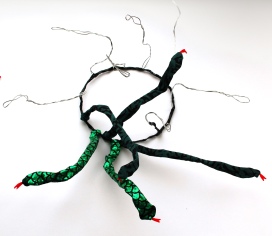 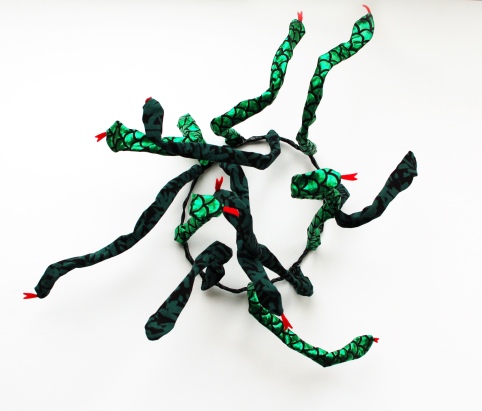 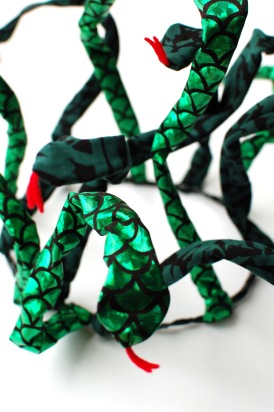 Making the headdress this way proved relatively quick and now that she has used it all the snakes can be folded flat making it much easier to store than if it had been rigid.

For the rest of the costume as it was very cold weather (book day went ahead on snow day at her school) I made a long sleeve green tshirt which she wore with mermaid leggings that I had made her for her sister’s under the sea themed party.

Over this she wore a gown made very quickly using gathered rectangles of fabric held together with a belt at the waist. 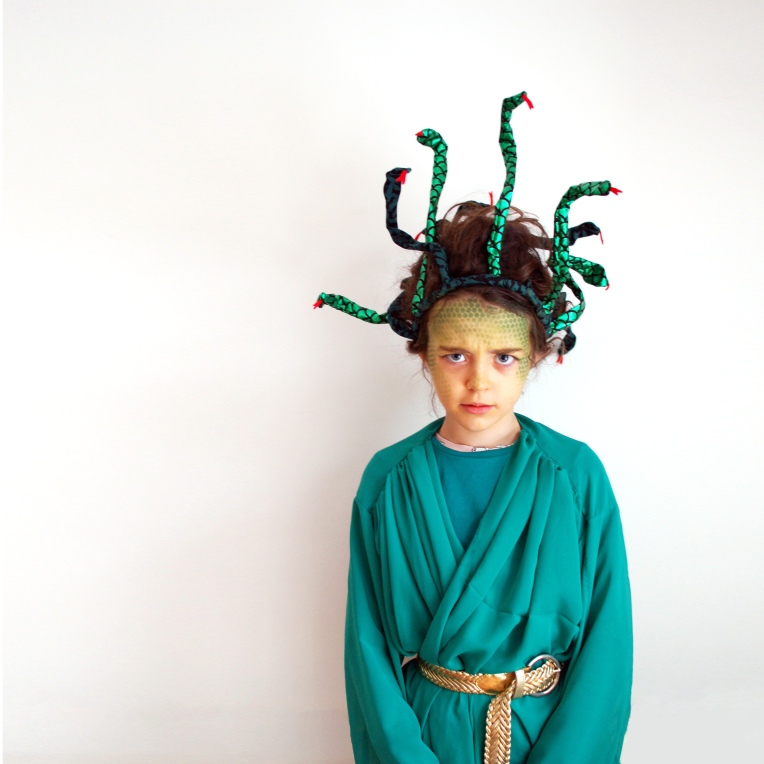 My younger daughter’s school was closed on March 1st so much to her disappointment her book day was postponed until today, when she duly got up VERY early to get into her costume.

She chose the character Rosie from Andrea Beaty’s wonderful story with super stylish illustrations. The books are not so well known in the UK but something tells me my youngest will relish telling them all about it. 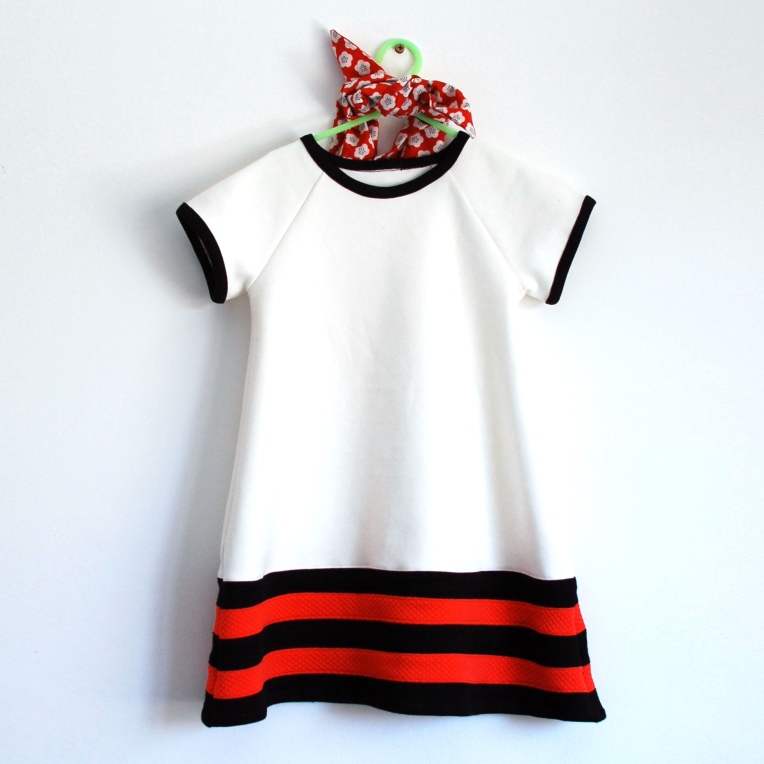 I recreated Rosie’s dress using the Safari Raglan dress by Titchy Threads, colour blocking the bottom part of the dress. I used the size 5. Although the size 4 would have fit better, this will get more wear. 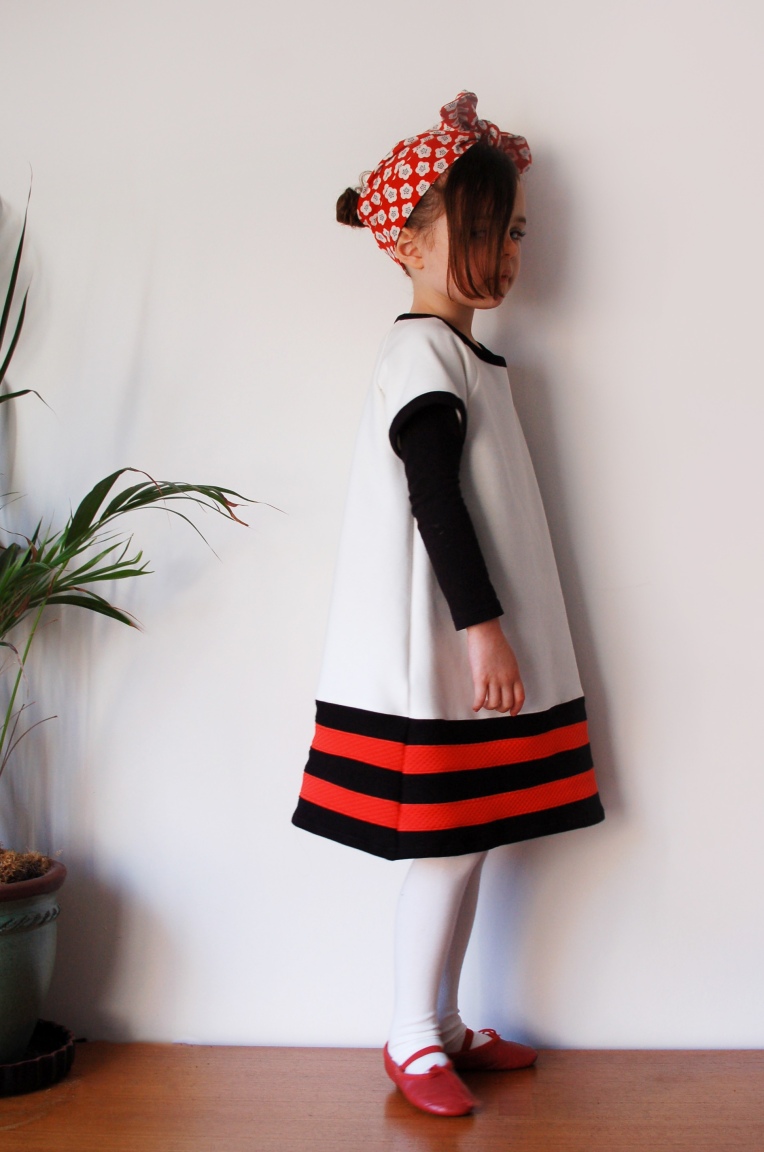 The scarf, although not authentically polka dot, was made with a scrap of floral fabric I already had.

Much to my delight whilst I was out a work one day both children got together to make Rosie a suitable prop for a wannabe engineer. They cobbled together bits of cardboard boxes and toilet rolls and combined it with part of their Snap Circuits* kits to make a wind up torch fan. Pretty much makes the costume as far as I’m concerned… 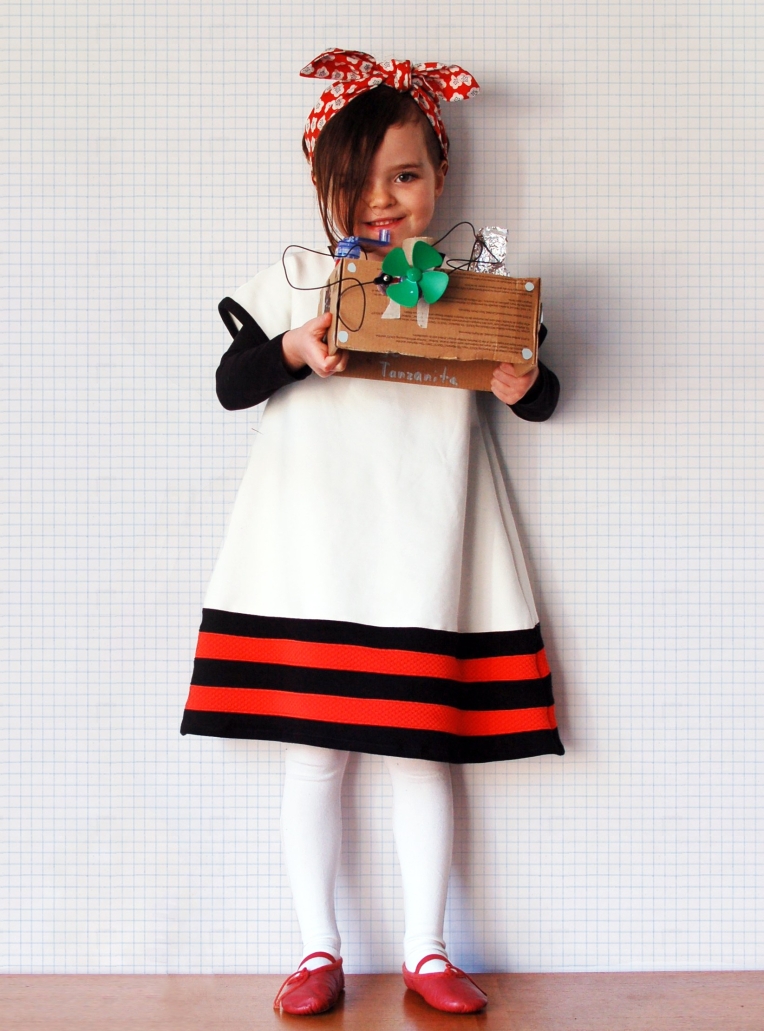 *Snap Circuits is an educational toy designed for children 8+. I bought the Green Energy set one Christmas (which ironically was the only non-secondhand/homemade gift they were given) and my brother had the same idea and gave them the Light set the same year. We have found them both (you can use them together) to be great educational sets. 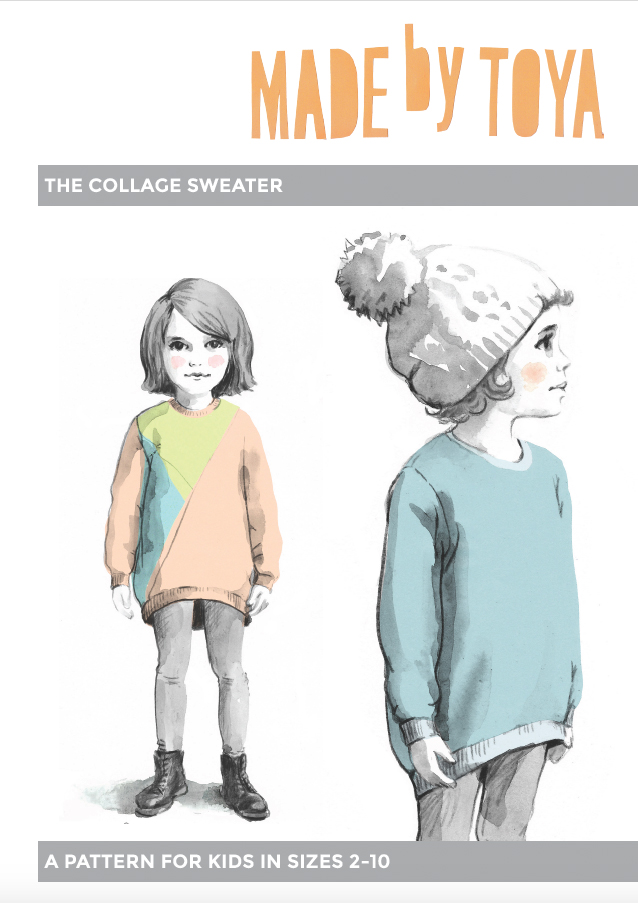 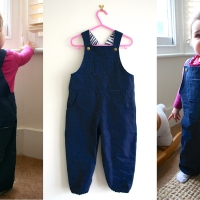 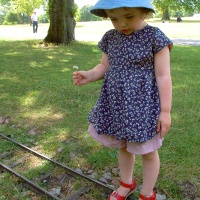 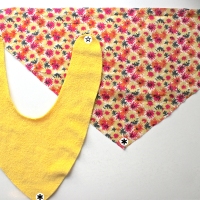 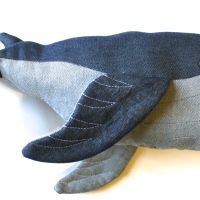 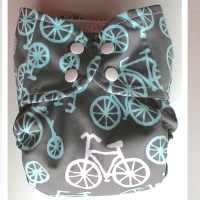 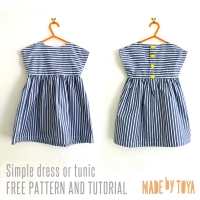 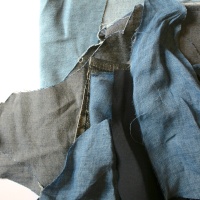 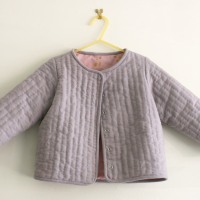 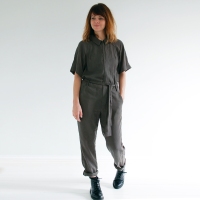 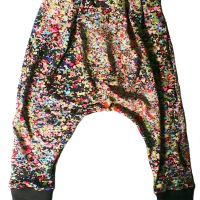 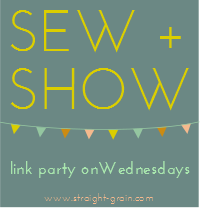